The San Angelo Chapter of the National Association for the Advancement of Colored People (NAACP) under the leadership of its President, Sherley L. Spears, has initiated a project to create a Buffalo Soldier Memorial in the Paseo de Santa Angela Park to finally honor the legacy of those courageous men and give special recognition to many who served at Fort Concho and the four who are buried at Fairmount and Delta Memorial Cemeteries.   The San Angelo NAACP Buffalo Soldier Memorial establishes a place of honor for the many who have not been given their proper recognition in United States history and the United States.

Participate in our project with your financial support. To give directly to the project, visit: https://www.saafound.org/buffalo-soldiers-memorial-fund. Take a look at the many ways you can be involved and support the project.

Proudly display your support by selecting merchandise from the list below:

Enjoy the video on our night of celebration: 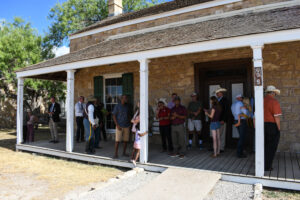 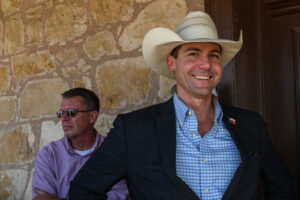 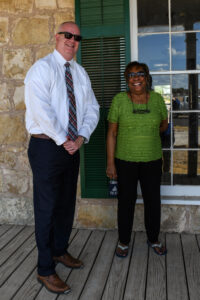 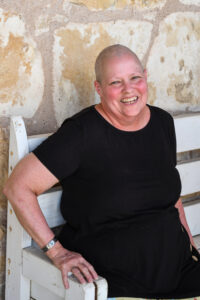 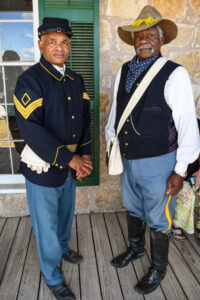 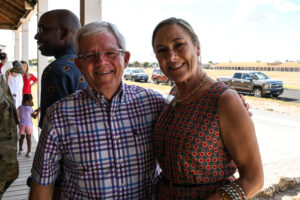 A dinner and Living History Presentation was held Friday, July 29, 2022 at the Fort Concho Stables.   The event was hosted by the San Angelo NAACP Buffalo Soldier Memorial Project Team.

A special presentation about Ellen Beck Goldsby, a laundress at Fort Concho was made by Sherley Spears who told the story of Ellen’s life.    Guest presenters, Douglas “Woody” Woodard and Charles W. Young of the Territory of Arizona Buffalo Soldiers, presented a living history program about the Buffalo Soldiers.

History of the Buffalo Soldiers

On July 28, 1866, Congress passed the Army Organization Act, allowing African American men including many former slaves to serve in the specially created all-black military units following the Civil War.  The original troops were 9th and 10th Cavalry and the 38th, 39th, 40th, and 41st Infantry.  In 1869, the four infantry regiments were reorganized to form the 24th and 25th Infantry.  Congress established these all-black regiments to help rebuild the country after the Civil War and to patrol the remote Western frontier during the “Indian Wars.”  A primary assignment for these soldiers was to make way for Americans moving westward safe.

These soldiers served in Arizona, California, Kansas, Louisiana, Montana, Nebraska, New York, Oklahoma, Texas, Utah, Vermont, Virginia, Cuba, Mexico and the Philippines.  They were recognized for their heroics including serving with Theodore Roosevelt and riding alongside the Rough Riders in Cuba during the Spanish-American War and aided in the capture of Billy the Kid and Pancho Villa.  These soldiers were repeatedly cited for heroism and dedication to duty, and account for at least 22 received Congressional Medals of Honor.

In 1868, the first Black troops reported to Fort Concho in San Angelo, TX.  The initial infantry regiments reporting were the 38th and 41st Infantries and the 9th and 10th Cavalries.     During their service time at the fort until 1885, these regiments were assigned various duties and worked in many campaigns with distinction.

During the Indian Wars, these soldiers were given the name “Buffalo Soldiers” by Native Americans of the Great Plains for their bravery and courage, which reminded them of the fierceness of the buffalo. These Buffalo Soldiers experienced racial prejudice and discrimination yet served bravely and with distinction.  In addition, to opening up the west for settlement, these soldiers, along with their white counterparts, mapped the west, stretched telegraph lines allowing the area connection to the east, served as a police force where no law existed, served as park rangers in the newly created national parks, and generally facilitated the civilization of the center of the nation.

Collectively, the Buffalo Soldiers had low court martial and desertion rates.  Such acts of honor and valor directly contributed in later years to the formation of the Tuskegee Airmen and the Fighter Pilots known as Red Tails in World War II.  Before President Harry Truman signed the Executive Order 9981 in 1948, more than 200,000 African American men served in the United States military in segregated units.  Executive Order 9981 called for equal treatment and opportunity for all African American service members.

During the 102nd Congress of the United States of America at the 2nd session held in Washington, DC, on Friday, January 3, 1992 a Joint Resolution was presented and passed as Buffalo Soldiers Day.  This day of honor is recognized July 28th of each year.